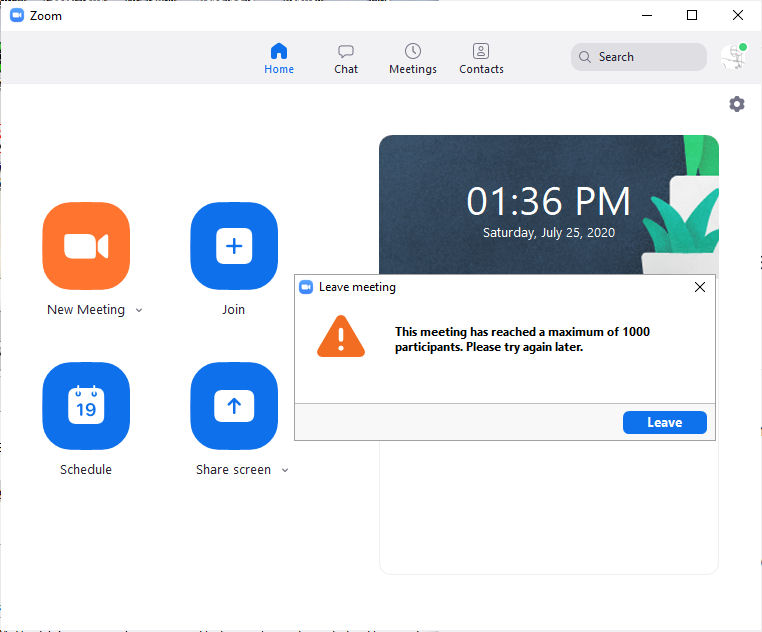 
Saturday afternoon I tried to join a large Zoom meeting, but was turned away: "This meeting has reached a maximum of 500 participants. Please try again later." I did try again later. The maximum had been increased to 1000, but I was again turned away. It is hard to fathom a successful video meeting with 500 sites, but apparently that one was working well enough to double the site count!


That morning I spent 90+ minutes in a Zoom meeting across about 35 locations, including one large room with a lectern. The main technology distractions were people showing spreadsheets differently than intended.

Zoom isn't perfect. Zoom isn't the only option. It just seems that way. I average 3+ Zoom meetings a week, 6 last week. Not quite as painless as making a phone call, but almost. Echo cancellation misbehaving is probably the biggest annoyance.

Unlike Facetime, Skype, WhatsApp and other options, Zoom even supports H.323 & SIP. I assume hardly anyone uses a Gatekeeper/Gateway to Zoom to a legacy H.320 system, but I wonder if/how that works.

Enough about Zoom. I still wish Facetime wasn't Apple only. I still get frustrated to find hours later that someone has tried to reach me on Facetime. For arbitrary reasons, I tend to use only Linux and Windows machines during the day and use an Android phone, so if someone tries to Facetime me during the day I don't see the missed call until I use an iPad in the evening and macOS at night. I rarely place Skype calls but can be reached on Skype when awake. I don't think I've ever initiated a WhatsApp video call but am used to receiving them. It seems like every medical practice has their preferred telemedicine video app, but most seem to work ok. Though TV news still uses traditional video for their own personnel, most shows seem to have a majority of participants using Zoom, Skype or Cisco, and rarely more than a couple of people in the studio, in this new era of physical distancing.

End Note -- It hasn't gotten any easier to track the business of videoconferencing. Logitech still provides everything from mice to conference room videoconferencing systems. Poly still provides everything from headsets to videoconferencing infrastructure. Lifesize is no longer only a videoconferencing company now that Lifesize has merged with Serenova and features contact center solutions. Cisco and Microsoft are even harder to characterize. At Cisco.com, with all the WebEx redirects, it is hard to find TelePresence products that are not end of life, but I assume WebEx and TelePresence still contribute significantly to their business. Analogously, at Microsoft.com, it is hard to find Surface Hub products but there are a plethora of Teams items to notice.